Since 2008, the growth of 13 pin systems has escalated and has now become a more or less standard option for most caravan owners.

Issues such as pin burnout and bad pin contact which affected the 12S socket system has been virtually eradicated by the change over to 13 pin. The 13 pin system in generally accepted use, is that as described in ISO 11446. This design is the most widespread throughout Europe.

On balance, the ISO 13 pin is the ‘safest’ type of connection currently available between the towing vehicle and towed vehicle. There are some very good advantages for the 13 pin over the continued use of 12N/12S systems. These include:

– The 13 pin system is designed to be of a ‘watertight’ construction. 12N/12S are not
– The 13 pin has greater compatibility with trailers and caravans used throughout Europe
– Unlike the 12N & 12S, the 13 pin connection between plug & socket has a twist fit locking mechanism which ensures full pin contact
– A high number of detachable towbars support a single swivel down socket plate. The use of 12N/12S does not permit the swivel action of this plate

With the change to 13 pin now firmly in place, there will always be the need for ‘adapter sets’ to interface the different connections between the car and caravan.

Right Connections has a wide and varied range of adapters so please visit this page on our website.

We have provided a guide to pin functions and wire colours which you may find useful.

The wire colours and wire sizes are recommendations made in the relevant ISO No. shown below each chart: 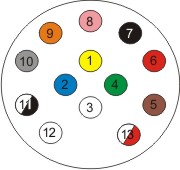 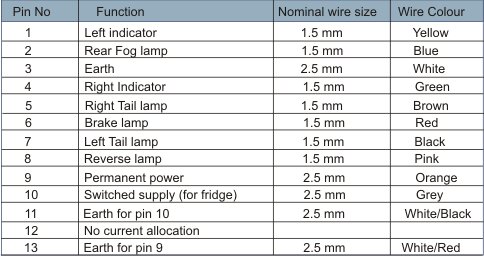 Further information can be found by clicking on the link below:

By continuing to browse the site you are agreeing to our use of cookies.